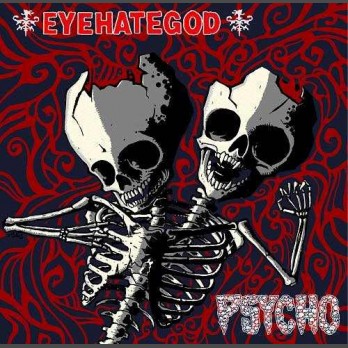 New Orleans' Sludgecore lords EHG team up with Boston's sickest grinding Hardcore veterans Psycho on an incendiary 9" slab of vinyl!! Yes, 9 inches of uncontrollable, sheer insanity and negativity from two bands that have never failed delivering anguished, blood-dripping sonic violence over the last 3 decades.. Both sides have been recorded live in Europe during their summer tours June-July 2011, and the audio quality of these soundboard recordings is simply astonishing, clean, powerful and heavy as a steamroller crushing your eardrums! Both sides capture the very core of the intensity of these bands on stage, and you know what to expect: EHG crank out 3 tormented classics of misanthropy-tinged heaviness.. "Story of the eye", "New Orleans is the New Vietnam" and "Sister fucker", PSYCHO complete the hecatomb with 6 short and fast stabs of rabid Hardcore/Grind in their own matchless style. What else to add? We chose to do this as a 9" because we find it a highly collectable and enjoyable format and reminds us some classic oversized 8" pearls of the '80s Japanese Hardcore scene of which we are total maniacs... and to get even closer to that feeling, the front cover art was drawn by Malleus taking inspiration from an old Kikejii flexi disc released in 1983 by ADK Records! It also comes with an insert with both bands' photos. Dedicated to Joey LaCaze and Seth Putnam.