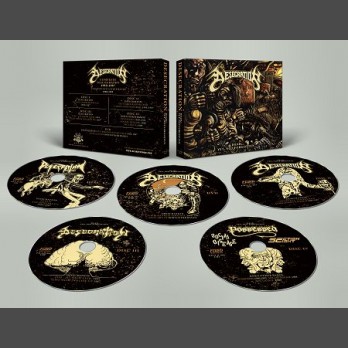 Over 4 years in the making, here comes another milestone of stubborness and dedication to the true underground roots put together by your beloved F.O.A.D. psychos! Pioneering Death/Thrash Metal in the best Bay Area tradition delivered by maniacs that lived the very core of the early Californian Thrash scene and roadied for Possessed and Slayer tours! 4 x CDs, 86 songs in over four hours of neck-breaking devastation including all the existing demo recordings, loads of unreleased tunes and live cuts all taken from Bob Yost's personal collection (mint 1st generation sources) restored and mastered with obsessive dedication to deliver you the best possible sonic mayhem! This ultra exhaustive discography shows the band through its different stages of evolution: from the early line-up that occasionally featured Mike Sus (Possessed) on drums, mostly leaning toward a primordial brand of raw blackened Death Metal reminescent of early Death and Possessed, to the latter line-up moving to total mindblowing Thrash oozing the strong Crossover/HC influence that invaded the Californian scene of that time thanks to bands like Attitude Adjustment, Cryptic Slaughter, D.R.I. and tons more. This monsterwork also features an extra CD compiling all Bob's Yost other bands from 1988 to 1991, among which you get POSSESSED with their devastating Demo 1991 + 10 unreleased tracks with that special line-up, and a radio interview. And believe it or not it's hands down some of the fastest and rawest POSSESSED material ever heard! And there's even more: a DVD tracing the history of the band through the years, including shows with Chris Reifert (Autopsy / Death) on drums and a rehearsal with Tim Howell of Sacrilege B.C.! To cut it short, this has all the credentials to be considered a piece of Bay Area Metal history. The packaging consists of a deluxe 12 panel digipack including 2 ultra-thick booklets (75 pages filled with photos, flyers, liner-notes and lyrics) + an extra slipcase and OBI-card. Fully authorized by every former member, this boxset is entirely dedicated in memory of the highly missed founding member Bob Yost.