Scourge Hate Metal is a straight stab in the stomach that represents a full-on attack on all False Metal that still abounds in extreme music worldwide. Hate Metal is a sadistic alert to what’s truly real in Metal in a straight-up Death Metal delivery that should please those into Bathory, Sarcofago, Blasphemy, and Black Witchery. The album also features a very special participation by Wagner Antichrist on vocals on the track The Bread that God Crushed. This is the first time Antichrist participates in a musical recording since Sarcofago’s last output “Crust. Antichrist also oversaw the entire album production.

Scourge is a Death Metal band formed in the city of Uberlandia, in the state of Minas Gerais, Brazil. Despite being part of the new generation of Brazilian Extreme Metal groups, which includes bands such as Grave Desecrator and Bode Preto, the essence of Scourge stems deep in the early beginnings of Extreme Metal in Brazil. Drinking deeply from the altar of Sarcofago, Scourge is a vehicle to denounce humankind’s deepest perversions as depicted in the band’s debut album On the Sin, Death, Lust, and Hate, which was produced by Gerald Incubus (Sarcofago). Now, the band is releasing its sophomore effort Hate Metal worldwide via the partnership between the USA’s Greyhaze Records and Brazil’s Cogumelo Records.

2- The Bread that God Crushed

5- Sacrifice of the Dead

6- The Ancient Ritual of Death 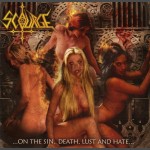