Pathologic Noise is pure, brutal, Death Metal. Started in the mid-90s in Belo Horizonte, Brazil, the band has been a mainstay of that city’s underground, Death Metal scene. Blood and brutality permeate the band’s music and lyrics. Their new album, Gore Aberration, goes deeper into brutal Death Metal territory and should please fans of Brazilian and South American Death Metal, as well as those who are into bands such as Cannibal Corpse, Deicide, and Morbid Angel. The album cover was created by famed visual artist Kelson Frost, who had also created artwork for bands such as Sarcofago, Headhunter DC, and The Mist.

6- Lights on the Dark Sky

7- Calling with the Dead's 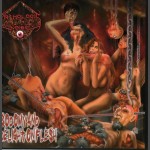