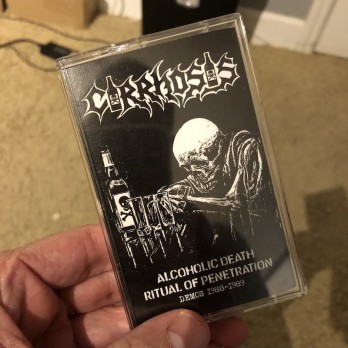 Created in the city of Uberlandia, Minas Gerais, Cirrhosis was formed by Wagner Antichrist (from Sarcofago), and Rodrigo Abalem. This is the band Wagner had in between the recording of INRI and Rotting. With those credentials alone, Cirrhosis already has its name in metal history. Antichrist would not stay in the band for long but it so turned out that Cirrhosis not only could stand on its own, it became one of the must cult and sought after extreme metal bands in Brazil.

From the start, Cirrhosis was about violent and endless drinking, until puking one's guts out. It was about hard liquor, raw meat, sex and satanic poisoning, and an inseparable brotherhood.

Wagner left before the recoring of these demos. Nevertheless they represent the very beginning of a blacked out journey that would eventually lead to the split ep - Alcohol Rules, and Alcoholic Death Noise.

- The Last Temptation of Christ